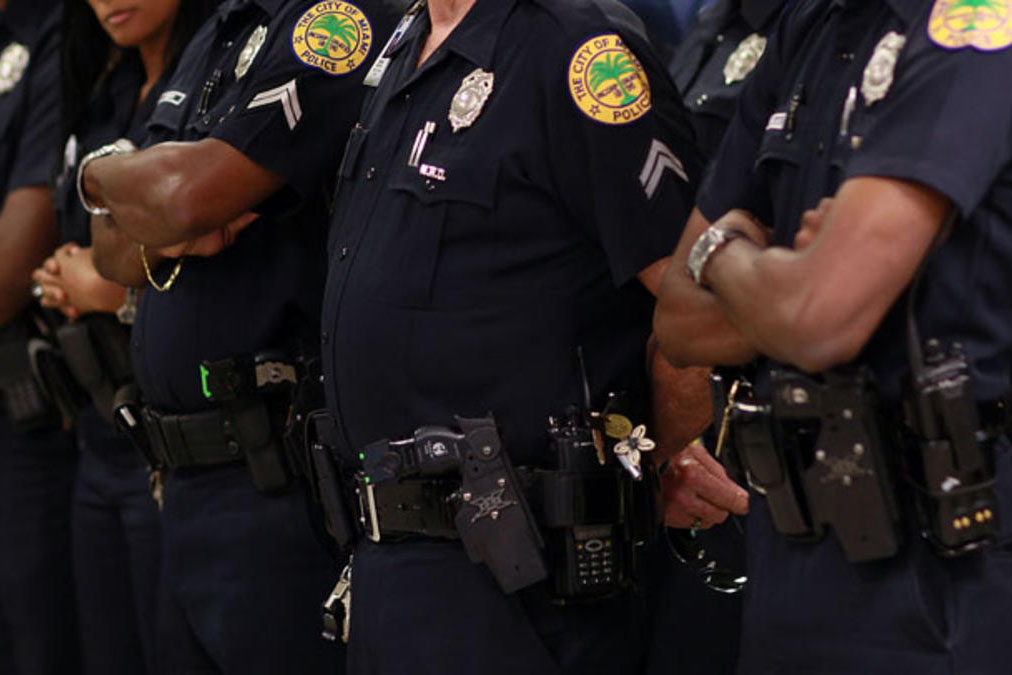 843.01 Resisting officer with violence to his or her person.—

Whoever knowingly and willfully resists, obstructs, or opposes any officer as defined in s. 943.10(1), (2), (3), (6), (7), (8), or (9); member of the Florida Commission on Offender Review or any administrative aide or supervisor employed by the commission; parole and probation supervisor; county probation officer; personnel or representative of the Department of Law Enforcement; or other person legally authorized to execute process in the execution of legal process or in the lawful execution of any legal duty, by offering or doing violence to the person of such officer or legally authorized person, is guilty of a felony of the third degree, punishable as provided in s. 775.082, s. 775.083, or s. 775.084.

(2) Whenever any person is charged with knowingly committing an assault or battery upon a law enforcement officer, a firefighter, an emergency medical care provider, a railroad special officer, a traffic accident investigation officer as described in s. 316.640, a nonsworn law enforcement agency employee who is certified as an agency inspector, a blood alcohol analyst, or a breath test operator while such employee is in uniform and engaged in processing, testing, evaluating, analyzing, or transporting a person who is detained or under arrest for DUI, a law enforcement explorer, a traffic infraction enforcement officer as described in s. 316.640, a parking enforcement specialist as defined in s. 316.640, a person licensed as a security officer as defined in s. 493.6101 and wearing a uniform that bears at least one patch or emblem that is visible at all times that clearly identifies the employing agency and that clearly identifies the person as a licensed security officer, or a security officer employed by the board of trustees of a community college, while the officer, firefighter, emergency medical care provider, railroad special officer, traffic accident investigation officer, traffic infraction enforcement officer, inspector, analyst, operator, law enforcement explorer, parking enforcement specialist, public transit employee or agent, or security officer is engaged in the lawful performance of his or her duties, the offense for which the person is charged shall be reclassified as follows:

(3) Any person who is convicted of a battery under paragraph (2)(b) and, during the commission of the offense, such person possessed:

Notwithstanding s. 948.01, adjudication of guilt or imposition of sentence shall not be suspended, deferred, or withheld, and the defendant is not eligible for statutory gain-time under s. 944.275 or any form of discretionary early release, other than pardon or executive clemency, or conditional medical release under s. 947.149, prior to serving the minimum sentence.